The objective of the MISOTOP project is to develop a better understanding of the structure and properties of a variety of functional (nano)materials, thanks to advanced spectroscopic analyses involving the stable isotopes of oxygen (especially oxygen-17 NMR). Investigations are performed along 4 main directions :

More details on these studies can be found below and in the associated publications.

Because of the very low natural abundance of oxygen-17 (0.037%) and oxygen-18 (0.20 %), isotopic labeling is often needed for performing high-resolution spectroscopic studies of molecules and materials. However, up until recently, most oxygen-enrichment schemes were simply unattractive to a broad research community, because they were costly (due to the use of excessive quantities of enriched precursors) and/or experimentally constraining (due to the long reaction times or harsh synthetic conditions). This implied that spectroscopic techniques such as 17O NMR were only used by a small number of research groups.

In 2017, we demonstrated for the first time that synthetic protocols based on ball-milling can be used for the 17O-labeling of organic and inorganic compounds in a cost-efficient and user-friendly way. The reactions are all performed in a few hours under ambient conditions, and using very small quantities of 17O (or 18O) enriched water. Since then, we have been expanding the families of compounds which can be labeled by mechanochemistry, showing that it is applicable to oxides (SiO2, Al2O3, TiO2, ZrO2…), hydroxides (Ca(OH)2, Mg(OH)2…), carboxylic ligands (terephthalic acid, trimesic acid…), fatty acids (stearic acid, oleic acid…), and other small molecules of biological or pharmaceutical interest (ibuprofen…). Moreover, we have started to work on the scale-up of some of these reactions, so that the 17O (or 18O) enriched species can then be used as precursors in standard synthetic protocols of molecules and materials, and thereby help answer the needs of a wide community of chemists.

Oxygen-17 is a highly attractive probe in solid state NMR, due to the wide range of variation of chemical shift (δiso > 1000 ppm) and quadrupolar parameters of 17O (|CQ| > 15 MHz). Nevertheless, its development has been slowed down by various factors, including the limited availability of enriched species. Here, the access to a broader variety of 17O-enriched species offers a whole new range of opportunities not only for elucidating the structure of complex molecular and materials systems, but also for performing new developments in the field of 17O solid state NMR. Our overall goal is to develop a better understanding of the link between 17O NMR parameters and the local structure and dynamics around the oxygen, depending on the type of chemical bond it is involved in (covalent, coordination, hydrogen bond…).

In this context, we have been working along several directions, which include (i) performing higher resolution analyses at ultra-high fields (20 to 35.2T) to help finely resolve different oxygen sites, (ii) studying the structure and dynamics of various oxygen bonding environments through variable temperature analyses and computational modeling (including ab initio calculations of NMR parameters and molecular dynamics simulations), and (iii) using dynamic nuclear polarization (DNP) techniques for better resolving some of the 17O-sites enriched in ball-milling. Some of these investigations are performed on the instruments available in large scale facilities (IR-RMN THC network in France, UK high field NMR facility in Warwick, MagLab in Tallahassee), and in close collaboration with researchers from these laboratories.


Interfacial bonds are intrinsically difficult to characterize using techniques like NMR, notably because of the small number of interfacial atoms (in comparison to the bulk). However, a deep understanding of the structure and reactivity of interfaces is important to fully rationalize the properties of functional (nano)materials. Here, using molecules or materials enriched in oxygen-17 by ball milling, our goal is to perform high-resolution 17O NMR analyses to help identify the oxygen bonding environments at the surface or interface of (nano)materials. Our focus is set on studying (i) interfaces such as those which form during ball milling reactions (to help elucidate reaction mechanisms in mechanochemistry), (ii) organic-inorganic interfaces such as those present at the surface of nanoparticles or in hybrid biomaterials. 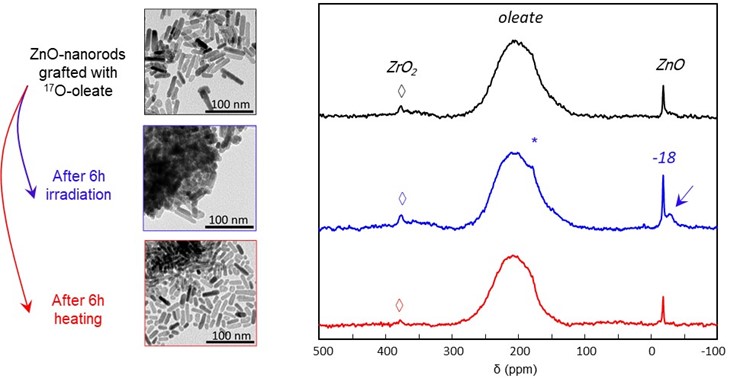 While the use of ball-milling is drawing increasing attention for the synthesis of functional molecules and materials, one of the main goals of the mechanochemistry community is now to gain deeper knowledge into the actual reaction mechanisms occuring inside the milling jars. This can be done through ex-situ analyses of reaction media at different time points (using techniques like IR spectroscopy, powder X-ray diffraction, or solid state NMR, including 17O-NMR). However, some reaction intermediates cannot be observed through ex-situ analyses, which explains why much effort is being put into the development of operando analytical methods, including synchrotron powder X-ray diffraction and Raman spectroscopy.

In Montpellier, we have started to couple different operando analytical methods (Raman analyses, thermal camera measurements…), some of which had never been proposed before (acoustic analyses). We have shown that this can not only help understand the formation of coordination networks or co-crystals under ball-milling conditions, but also help rationalize some of the changes in physical aspect of the reaction media during ball milling